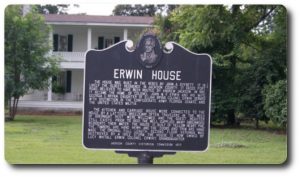 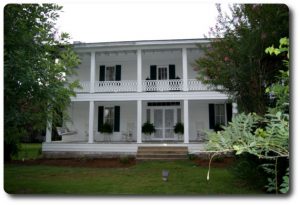 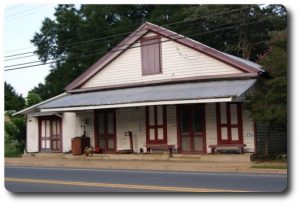 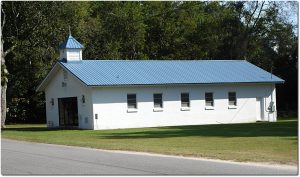 The Town of Greenwood was established in 1824 and incorporated in 1927.

When settled, Greenwood was surrounded by large plantations. Several homes are still maintain that were built before the Civil War, including the Hayes House, the Erwin House, Great Oaks and the Hayes-Long Mansion, first built by by large land owners.

The East-West street through Greenwood is named Fort Road, having originally began at a fort on the Apalachicola River and running westward to Pensacola.

Greenwood at one time had doctors, two (2) cotton gins, a large peanut mill, a rail road (still operating in 1929), several general stores, a corner drug store and a livery stable. We also had a theatrical group that presented plays in the area in the 1880’s. Two (2) West Point graduates hailed from Greenwood.

The Erwin House is one of the oldest, if not the oldest, house in the county. It was built in the 1830’s by John A. Syfrett. It was purchased in 1861 by Colonel John M. F. Erwin for his wife, Georgia Bryan Erwin, and infant son, Elijah Bryan Erwin. Colonel Erwin served with distinction in the Florida Senate, U. S. Militia, and the Confederate Army. During the 1880’s, the Erwin House was open to overnight travelers in need of rest. The guest book still exists.

Greenwood has seven (7) homes and one (1) store that are eligible for the National Registry.

The Great Oaks was built in 1860 by prominent planter Hamilton Bryan and was then known as Bryan Plantation. Great Oaks stands today as Jackson County’s most handsome example of antebellum architecture. The building has served twice as a school.

The Dickenson House is situated just north of Great Oaks. It was built by E. T. C. Dickenson and his bride, Lizzie J. Bryan Dickenson.

The Longwood House was built using wooden pegs and square cut nails. E. George built this house in 1849 for the estate of James Hayes.

The Willis House is a large two-story frame home built by Doctor and Mrs. R. A. Willis. It was completed in 1917. It is now referred to as Greenwood Plantation Gallery.

Pender’s Store, still open for business, was built in 1869 by Napoleon B. Riley, and Cicero Long. It was named N. B. Long and Bros. Laurence S. Pender purchased the store in 1896 and changed the name to L. S. Pender=s. The Pender family has operated it ever since. In 1940, the sons of L. S. Pender, James Bowles and Nicholas Anderson, purchased and renamed the store, L. S. Pender’s Sons. It is currently operated by Laurence Pender, II. The original shelves and heart pine floors are still in place, and the wooden blinds over the windows are still closed every night.

The original school building was a wooden two-story building located on Bryan Street across from the Methodist Cemetery. This was in the early 1900’s. The next school was located on Applewhite Street. It was a three (3) story brick building. It was built, completed and open in 1923. It burned around Christmas in 1940. While the school was being rebuilt the Great Oaks served as a temporary school. The building standing now was completed in 1943 or early 1944. The gymnasium was built in 1940. The lunchroom was started in 1955 and completed in 1956. The Town of Greenwood obtained the area that is now our park including the gymnasium about 1975.

The Greenwood Town Hall is located across from Pender’s Store. The northern part was built in the 1960’s and served as the post office until 1988. The southern portion was built as a Pure Oil Company service station in the 1930’s. It was given to the town in 1998 and moved to its present location.